The Voice of Lost Voice Guy

In 2021 a friend of mine called Steve Whiteoak (who took my headshots for me during the same year), tagged me in a post on Facebook by Lost Voice Guy, it was entitled “Looking for my Geordie Voice“, or words to that effect anyway. Ste was insistent that I should audition as at the time I only lived 10 miles from where Lost Voice Guy originates, and I’m a voice actor.

When I read through the article it became more and more obvious that I had to audition, it seemed too coincidental that I should have the skill set that he may be looking for. At the time there was much going around in my mind about auditioning, as there is with any audition I guess, on this case I was torn between emotions, logic and sheer over thinking. What if he doesn’t want a voice over providing his voice? What if he does choose me and then I have given away the thing that I use to earn a living? All these thoughts were running through my mind.

Usually in these circumstances I would ignore the voices and just do it anyway until one morning I woke up, chance would have it Valentines Day, and I ran in the booth and read the audition piece. I also sang a little song, just for… well, demonstration that singing wasn’t really one of my strengths.

After sending it in I gave it seldom thought, until a few weeks later I woke up to a new follower on Twitter, it was Lost Voice Guy. I thought to myself, “huh, that’s funny, maybe he liked my singing and decided to give me a wee follow”, until a couple hours later a response arrived from my emailed audition.

“Hi Dan, Thanks very much for responding to my request for a Geordie accent. It’s been really hard to choose…”

Usual starting to an email I am all too familiar seeing, “we’ve decided to go with another VO”, however, I read on.

“…but I’m happy to say that I kept coming back to listen to yours and I think it’d suit me really well.”

The words fell on me like a rock on the drifting to the ocean floor, heavy yet gradual. As the emotions built up inside me I felt joy, I felt excitement, I felt fear! Back rushed all the previous thoughts which held me back from applying in the first place. Was this the right thing to do? Would I be giving up my main instrument, my voice? I rushed to inform my other half, who after calming my irrationally babbling state reminded me that this was one of the highest honours of my career.

Someone had chosen me to be their voice, the communication device, the way they sound to the world. Someone who’s career relies so heavily upon communication and comedic delivery. Furthermore, this was the most incredible gift I could give someone, the ability to find a way to communicate with something they felt comfortable with. In a way that would allow people to identify their origins.

Making peace with the doubts and the overwhelming positives I was eager to get started. 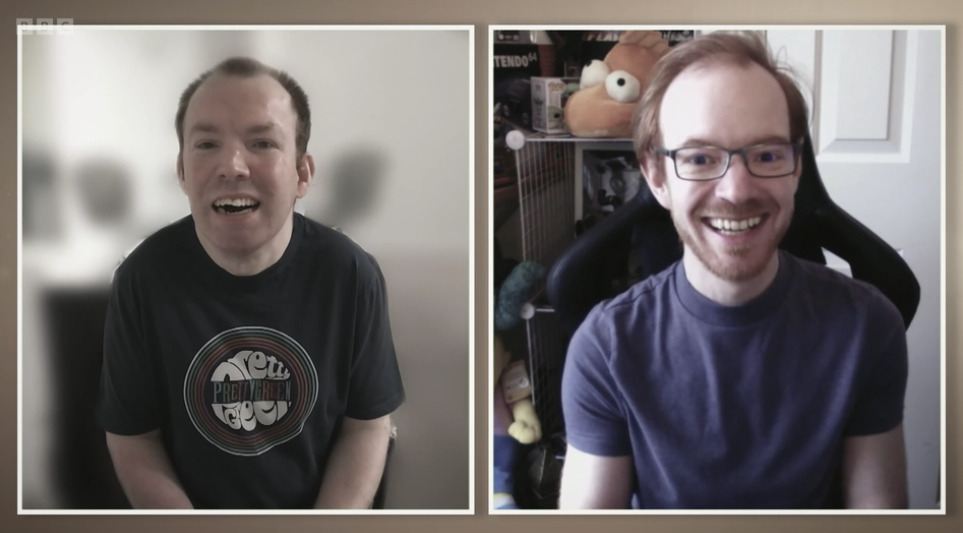 It began by reading samples of news paper articles to confirm my voice was suitable for donor. I did this from my studio at home with a company called CereProc in Edinburgh. After a 30 minute voice over call, they were satisfied I was suitable for the role. The next stage was the negotiation on contracts.

I’m not going to write too much about this, it was something which was dealt with by my agents, Excellent Talent, and also Lost Voice Guy’s agents. I guess the main thing we wanted to achieve with contracts is that both parties were protected. From my side of things, there is a negative press surrounds the use of AI and Text to Speech in the voice over community, and so we wanted to make sure that the files were used only for Lee, and this would be the sole purpose of the recordings. After all was negotiated and everyone was happy, we moved to the next stage, announcement.

The announcement that Lost Voice Guy had found his new voice took place on the most difficult day to announce things, April 1st 2021, and worse still, it was at breakfast time. BBC Morning Live had the media coverage exclusive. Here’s a clip from that day.

Next it was time for the recording of Lee’s new voice. For this I had to travel to the home of CereProc who were producing the voice in Edinburgh. This took place in Edinburgh in May 2021 when the country was still in the height of the pandemic. I was able to travel as it was in my line of work, and what an interesting experience it was. The hotel was empty and quiet, Edinburgh was a shell of the city it usually is, albeit still beautiful.

The process involved 8 hours of studio time split over two days. It doesn’t sound like a great deal of time, and it certainly isn’t compared to previous requirements for this type of voice program which would take place over a week or so with many more hours recording.

On arriving at the offices for CereProc, set right adjacent to Edinburgh Castle, it was time to get started on the days recordings. I was taken into a Studio Bricks recording space, which was spacious however dark as the only light in the booth had previously broken. I didn’t mind this, I was used to being in the dark thanks to my other lines of work!

The screen was illuminated with sentences stacked on top of one and other. A pair of headphones were placed on my head with an integrated microphone which had to remain the same distance from my face at all times, to assure this I had a photograph taken as reference for after breaks and the following day.

The process was rather straight forward, I would read a sentence after hearing a beep in my ear, then after I had said the sentence there would be a second beep, after which I would wait for another beep and record the next sentence. I was instructed to make sure I sustained the accent consistently as well as the projection and pronunciation. My decision was based on my original audition, which was a slightly more pronounced Geordie version of my natural speaking voice, something which was me, but not exactly me, something which could be uniquely Lee’s voice.

The sentences were a range of nonsensical and random words adjoined in what I can only assume was a strategic purpose for the way in which the software works. We moved passed the random sentences to then conversations between cheeky personalities. I loved these parts especially as it really gave me an opportunity to essentially have a conversation with myself in a very characterful way.

The previous sentences had to be straight and non characterful, where as these ones I could be as characterful as I wanted. After that we went on with some really random scripts which to be honest, had some really rather sordid conversations and expletives. These were fun, and there was one which distinctly sticks in my mind which I feel is safe for this blog entry, it was; “If I was into smash mouth, would you let me sit on your face”.

After the couple days were nearly drawing to a close it was time to record some stand alone sentences and phrases which were common for the North East accent. “Howay the lads”, “alreet pet”, all of these kind of things were recorded at this point, which after listening back to Lee using them, makes me realise maybe they were so the computer could learn the way they should be said, as they are still said with a degree of robotic intonation.

That was it, all done! Recorded and finished, now the work rested with CereProc to produce the final piece. Months passed, and delays occurred until at Christmas time Lee messaged me to make sure I was going to watch his Christmas Eve show on ITV. I am a huge fan of Lee’s work so of course I would have been watching it anyway.

During the show, there was a point where by he gave the guests a gift from under his tree, however, after a performance by fellow stand up comedienne, Rosie Jones, he was given a gift from himself, his new accent. This was the world premiere of Lost Voice Guy’s new accent and voice!

A couple months later and further tweaks and it was time to announce to the world that the new accent was ready. We met in a theatre in Newcastle with ITV regional and ITN National news to be introduced to Lee’s new voice in person. It was such an incredible experience. I was anticipating feeling strange about having a conversation with someone who sounded just like me, but oddly enough, it wasn’t like that, it was Lee. Throughout our conversations never once did I stop and thing, this is strange, it felt so natural to be having that conversation. However, thinking about it now, maybe it’s because I’ve just been talking to myself for years…

It’s been such an illuminating career highlight to do this, to take part in such a wonderful project for quite frankly someone who is an incredible inspiration to all. Lee continues to inspire me to continue to seek my dreams and continue to do what I love most, which is voice over or voice acting as many refer to it now. I feel like it is certainly the highest compliment I have had throughout my career. I spend so much time bringing people, creatures, and inanimate objects to life through providing my voice, now to share that with another human is really special to me, and long may it continue.